Dr. Ban Ki-moon, 8th Secretary-General of the United Nations, Elected as President and Chair of GGGI

Jakarta, February 28, 2018 – Dr. Ban Ki-moon, 8th Secretary-General of the United Nations (UN) has been elected as the President of the Assembly and Chair of the Council of the Global Green Growth Institute (GGGI) in Seoul, South Korea following the unanimous agreement by members of the GGGI Assembly, the Institute’s supreme governing body.

Dr. Ban began his two-year term in office as GGGI’s President and Chair on February 20, 2018, taking over from H.E. Dr. Gemedo Dalle, Federal Democratic Republic of Ethiopia, who undertook his duties as Acting President of the Assembly and Chair of the Council in July 2017.

“I’m delighted to have been elected as the new President of the Assembly and Chair of the Council of GGGI and am willing to contribute to promoting green growth and sustainable development around the world. I will also try my best to fulfil the expectations of the international community in this regard,” said Dr. Ban.

While serving two consecutive terms as Secretary General of the UN between 2007 and 2016, Dr. Ban sought to be a bridge builder, to give voice to the world’s poorest and most vulnerable, and to make the organization more transparent and effective. Dr. Ban worked closely with member states of the UN to shape the 2030 Agenda for Sustainable Development and to establish UN Women, thereby advancing the UN’s work for gender equality and women’s empowerment. Dr. Ban has also taken major efforts to strengthen UN peace operations, protect human rights, improve humanitarian response, prevent violent extremism and revitalize the disarmament agenda.

Dr. Frank Rijsberman, Director-General of GGGI, praised Mr. Ban for his achievements throughout his tenure as Secretary General of the UN. “Under Mr. Ban’s leadership, governments of the world agreed on concrete goals and targets necessary for achieving a more sustainable and inclusive future. The Climate Change targets agreed under the Paris Agreement and the 17 Sustainable Development Goals are rightly recognized among the world’s greatest diplomatic successes. His vision and leadership will help GGGI deliver even greater impact in our mission supporting Member governments to achieve the ambitions set out under the SDGs and the Paris Agreement.”

In Indonesia, GGGI partners with the Government of Indonesia (GoI) through the Ministry of National Development Planning (Bappenas) in a joint GoI-GGGI Green Growth Program (GGP), which is now in the second phase. Launched in August 2016, GGP Phase II supports planning, enabling and investment for green growth in three sectors: energy, green infrastructure within Special Economic Zones (SEZs) and sustainable landscape. GGP has since continued the efforts to attract the interest of public and private investors as well as national and international green finance.

At the planning stage, GGP incorporates green growth enablers for investments into sectoral, district, provincial and national plans. This is followed by designing innovative economic and policy instruments to reduce risks and enable capital flows into the sectors, leading to the final and ultimate step of GGP Phase II, which is to design projects that are bankable based on Nationally Determined Contribution (NDC) and Sustainable Development Goals (SDGs) assessments and to connect with suitable sources of finance.

GGP has achieved several notable milestones, including kicking off a feasibility study in February 2017 for solar PV development in SEZ Mandalika, West Nusa Tenggara, and commencing a strategic collaboration with the National Institute of Public Administration (LAN) in September 2017 to design green growth curricula for state apparatus. The program’s latest achievement was the finalization of a pre-feasibility study on a hybrid solar PV project in eight locations in East Nusa Tenggara, which was officially handed over to a private consortium in February 2018 for further study and development, signifying the program’s first successful private sector engagement and possibly a promising beginning of a green Public Private Partnership model in Indonesia.

Dr. Ban’s irrefutable image and well-proven leadership is expected to strengthen the position of GGGI as a trusted partner and advocate of its member countries, including Indonesia, and increase the confidence of public and private stakeholders to work together towards a resilient world of strong, inclusive and sustainable growth.

Protected Forest as a Source of Energy

The Forestry and Environmental Research, Development and Innovation Agency (FOERDIA) of the Ministry...

NTT: Paving the Path to Green Growth and Bringing Renewable Energy to Life

The Provincial Government of Nusa Tenggara Timur (NTT) realizes that NTT is one of those areas where... 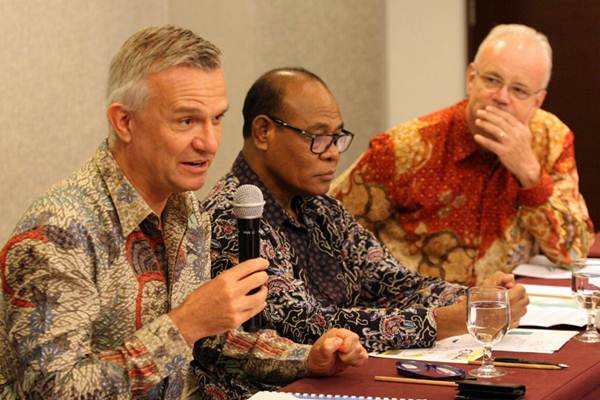